UPDATE 2/17/15: I have now thrown my re-drilled HYPER CELL SKID several times. The drilling recommendation came from Roto Grip’s Chris Schlemer, who I should have consulted in the first place!

The pin is above my middle finger and the CG is just a bit right of my grip center, leaving the RG (mass bias) out to the right of my thumb. The drilling angle is about 45 degrees. The numbers are 5 inches pin-PAP, 2 1/2 MB-PAP, 3 1/2 pin buffer based on my PAP of 4 inches over and 5/8 up.

I have left my SKID shiny.

The SKID is the strongest pearl I have ever thrown and I don’t think it’s close, which doesn't surprise me considering how strong the HYPER CELL solid is. The SKID rolls very strong and very continuous and it’s easy to cover a ton of boards, though it looks to me like straighter angles improve carry. And unlike most pearls it handles fresh oil well, so long as it is not a long flood. (And I'm sure it would do OK on that with some serious roughing of the surface, but isn't that what the HYPER CELL solid is for?)

I used it at a PBA50 Regional on Cheetah that had a ton of skid left of about 8-board. Was able to go around it crossing around 10 at the arrow to the right and the biggest issue I had was burning too much energy and leaving weak 10-pins.

When I took my ring finger out and used just my middle finger and thumb — it cuts my rev rate roughly in half — I could square up quite a bit and my carry improved dramatically. (A younger person who hadn’t had 3 wrist operations could do this with ball speed!)

I’ve also used it on a broken down 45-foot Sport pattern playing a wet-dry line around 20-board. If it had reacted a little softer off the dry it would have been perfect – or if I could throw it a little faster than my maybe 16 mph!

The motion is not a defined, angular snap at the breakpoint, but more of a heavy, rolling continuous hook. Like most asymmetricals, it revs up easy and wants to start hooking as soon as it gets on the lane.

I have yet to find a house shot where it is my best option because it is so strong off the dry.

But with the new drilling, the SKID has gone from bad for me to definitely having a spot in my arsenal.

And for those with my kind of slow speed but less revs, or with higher speed and more revs, I can see the SKID being an absolute monster. I certainly now understand the raves I’ve seen about it.

So if you’re a person who fits one of those descriptions and would have to have a super strong pearl, the SKID likely is for you.

In my review last summer of the Roto Grip HYPER CELL I explained how it was not good for me with a VLS control drilling as it was too weak, but was much better when I plugged it and drilled it stronger with the pin above my ring finger by a couple of inches and the RG a little bit right of my thumb hole so it's close to a stacked drilling.

It was the one ball I had at the 2014 Senior Masters that I could get to make a strong enough move to give me some room and strike. The move is NOT angular — it's more rolling with arcing curve.

And I still use my HYPER CELL on heavier oil with the rough surface.

When I got the HYPER CELL SKID I was indecisive about how I’d drill it. The SKID uses the same Nucleus core as the HYPER CELL, but with the 73MH pearl coverstock instead of the 80H MicroBite coverstock.

The pin is under and left of my middle finger with the CG just above and left of my thumb and the mass bias kicked to the right because the pin-CG-mass bias line is not straight. The way it ended up it needed no hole to be static legal.

After many efforts with it, my SKID now is headed to be plugged and get re-drilled.

The drilling simply gave me the wrong motion — it was too early and strong for a pearl with such a powerful core and it forced me to get my feet too far left most of the time.

On house shots, when I threw it wide it would tend to burn and either not make it back or hit weak when it got there. And since I was typically standing in and going left to right, it often would skid too much in the oil or jump off the oil line. Lots of 2-pins and weak 10s followed by 4-pins and solid 9s.

On tougher shots, it was simply too aggressive to give me the controllable motion I wanted.

But as much as I like my HYPER CELL, I am not giving up on the SKID. I think with a pin above the fingers, I will be able to play more square with my moderate ball speed and have a much more controllable AND effective ball motion.

I have thought long and hard for a ball to compare the motion to and don’t really have anything to offer. Sorry about that.

The motion for me is super quick at the break point and then a very strong roll — not a boomerang. This is not a ball that worked for me trying to open the lane — it simply burned too much energy going out and back. The best success I had with it was square to the oil line, but as I said I had trouble getting lined up that way with as early and strong as my SKID was.

If I had more ball speed, it might be a different story, but even when I was half my 52 years I didn’t have much ball speed.

I am hoping for a different story with the different drilling.

Roto Grip's Chris Schlemer sent me a note after seeing my review saying that the drilling I tried was definitely not correct for me for this ball. He recommended a pin over my middle finger with the CG on the midline about 3/4 of an inch right of the center of my grip. I should have asked him for a recommendation first!

I will update this blog down the line after I have a chance to throw my SKID with a different drilling. 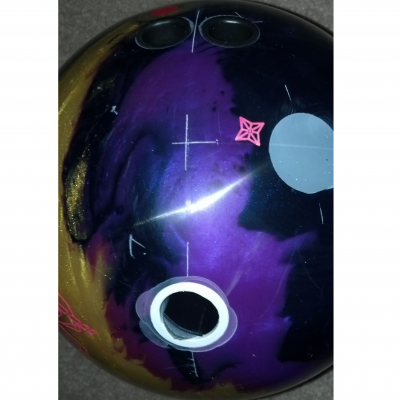 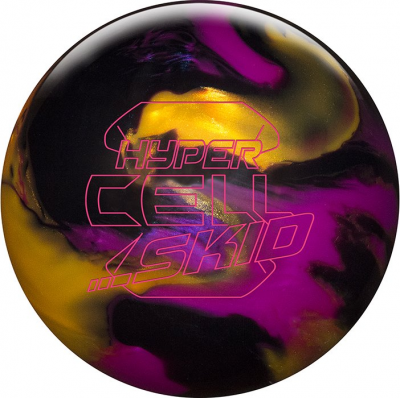 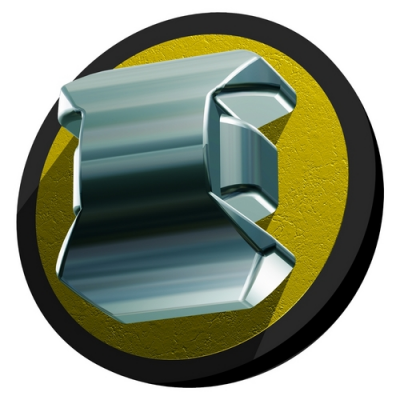