UPDATE: The top of this review is new information based on drilling a second LOCK with a much stronger drilling than my first: The new one, which is the second one pictured below, is 4 9/16 pin to PAP, 3 7/16 mass bias (key) to PAP, and 2 5/8 pin buffer.

The drilling has the pin above my fingers with the key kicked to the right. The ball did not need a weight hole because the CG was left of the line from pin to key and therefore ended up close to my grip center so it is static legal.

The lanes were trickier than they usually are for the Prairie Open with some hang outside and not the usual puddle in the middle, but when moving inside that also meant there wasn't as much wet/dry to deal with.

And the LOCK rolled awesome: very strong off the spot and continuous through the pins.

I have since used it on a house shot at an SSBA Senior Tournament in Muscatine, Iowa and it produced the same kind of reaction. In that event, though, I eventually had to put it away as the 3,000 box finish cover lane-shined too much for the huge puddle in the middle — I would love to have hit it with a 1,000 pad to see how it reacted.

I would say the LOCK is the most angular asymmetrical ball I have thrown from Storm and Roto Grip. It does not rev up in the front of the lane the way many asyms do, so it’s easier to get down the lane and then makes a much sharper move than what I expect from an asym — certainly compared to the CRUX, VIRTUAL GRAVITY, NANO, SINISTER or HYPER CELL.

One thing I typically don’t like about asyms is that they tend to rev up the way they want to rev up, with my efforts to tweak my release to change roll not having near the impact as with symmetricals. But the LOCK definitely is tweakable for me.

And as long as there is some oil, I have yet to feel like I am forcing it down the lane and fighting early hook.

In fact, if I just used a LOCK without being told whether it was asymmetrical or symmetrical, I think I would guess symmetrical.

Whether you think that is good or not, depends on what you favor as a bowler. I like it because it gives me kind of a cross between the two types — it’s stronger than a symmetrical but longer and more angular than an asymmetrical.

My intention is to keep the strong LOCK in 1,500 Turbo Sandbagger surface and use it as my benchmark ball on fresh, medium to heavy oil.

ORIGINAL REVIEW: After reading the specs and listening to my fellow Storm staffers describe how strong the new LOCK is, I approached it with caution.

I am 53 now and even down to 14 pounds I still have at best moderate ball speed, while dropping from 15 to 14 has enabled me to pick up slightly more revs and stay behind the ball better.

That means strong balls often are usable for me only on heavy and long oil conditions.

And I have plenty of strong balls with strong drillings, including a CRUX that I like a lot, with the pin well above the fingers and about a 75-degree drilling angle so the mass bias ends up a little bit to the right of my thumb. (It’s a 14 done long after I reviewed the CRUX so I didn’t measure the numbers.)

Especially with how strong the LOCK is, I didn’t want another strong ball drilled strong.

So I thought back to one of my all-time favorite asymmetrical balls — a VIRTUAL GRAVITY that had the pin above and a little left of my middle finger and the mass bias just to the right of my thumb. That ball lasted hundreds and hundreds of games over more than four years before I retired it.

I’ve since tried that control-style drilling in a few other balls with nowhere near the ball motion results as that VIRTUAL GRAVITY.

But I do have a SINISTER I love where the pin is above the middle finger and the mass bias is left of the thumb.

I had trouble with my first SINISTER that was drilled strong being too strong for my game, but the control-type drilling rolls excellent.

So I decided to try a combination of the SINISTER and VIRTUAL GRAVITY with my LOCK: the pin is above and a little left of my middle finger and the mass bias is left of my thumb hole. Because the CG is out of line to the left I actually needed to drill a weight hole LEFT of my grip — it is at 6 inches and I do not roll over it.

The LOCK, which is part of the Premier line, features the new the new GI-15 hybrid coverstock that comes 3,000-Abralon box finish, and the new asymmetrical RAD-X Core, which hasn’t been in any other ball but, says Storm, is built on the same platform that powered other RAD (Radial Accelerating Disk).

I have thrown my LOCK on a house pattern and the 47-foot Kegel Statue of Liberty pattern, both at Ten Pin Alley in Fitchburg, which uses Kegel Ice oil on 12-year-old Brunswick synthetics.

No surprisingly the LOCK with my control-drilling and just a 3,000-Abralon surface was not near enough for Statue of Liberty. Even with it taken down to 500 using an old pad by hand — so more like 1,000 — for the next week on Statue of Liberty it just didn’t make a strong enough move on the back, which my CRUX was making.

However, on the house shot, it was exactly what I expected: A strong ball I could go straighter with, similar to how my VIRTUAL GRAVITY was.

Even at 500 Abralon by hand I could not get in the puddle and get it to turn the corner — the drilling is just too weak. (I wouldn’t worry about that as others who have used it with a strong drilling say it is great for getting in the oil and sending right.)

However, when I got my feet back to the right and played up the oil line it was devastating (by my Raisin standards). And best of all was that I could throw it to the right into the dry and it made a quick move, but didn’t jump high — instead it turned and made a straight line move into the pocket without rolling out, which was an unexpected pleasure. The motion was like two straight lines — one out to the dry to the turn spot, the other from there to the pocket.

That was almost exactly like the VIRTUAL GRAVITY. And it was similar to my CRUX PEARL, except that it was shiny and tended to over/under at times.

Because it continued so well, I rolled about a dozen strikes without leaving a rollout 10, though I did 4-pin and ring 10. I also left a couple of 2-pin combos on shots I miss or was too quick/in with, which I attribute mostly to the control drilling.

I can’t wait to try the LOCK on some tougher patterns shorter than 47 feet. I will never forget the first time I used that VIRTUAL GRAVITY in November 2008: I won the GIBA Iowa Open on the flat U.S. Open pattern playing a straight shot up between 5- and 10-board thanks to the control that drilling provided.

I have had fellow Storm staffers tell me the LOCK is the strongest Storm ball they have thrown. I can’t say that but it may be because of the higher RG with 14 and/or the control drilling I used.

I will say I like the LOCK so much that I will be ordering another one and drilling it stronger just to see what I get.

If I could compare the LOCK to any ball in motion it would be the PARADIGM, which also was one of my all-time favorites. That was a ball that also made a hockey stick type of move where it got to the break point and then turned quickly and made a straight line sharp move to the pocket.

Balls like the VIRTUAL GRAVITY NANO and CRUX and SINISTER all rolled much more aggressively and early than the LOCK has for me, making them balls I struggled to get to the breakpoint. They roll hard and early and the key for me using them was plenty of oil in the front.

I have not had problems getting the LOCK to the breakpoint. Again this may be because of the higher RG with 14 and/or the control drilling I used.

I would like to have waited to review the LOCK until I could throw one with a strong drilling, but it is being released Tuesday and I have not even ordered the one to drill strong.

But based on what I have seen I would not hesitate to recommend this ball for almost anyone. It’s strong but doesn’t roll so early that people with slower ball speed need to shy away from it. It should give you a sharper move than the CRUX or SINISTER or HAYWIRE.

Those who need a really strong ball for traction in oil might be better off with the CRUX or SINISTER or HAYWIRE … while waiting to see if there will be a solid coverstock version of the LOCK at some point.

I would say that the LOCK probably isn’t going to be a good ball for shorter/lighter volume patterns, but that’s not what it was designed for and there are plenty of Storm and Roto Grip balls good for those conditions! 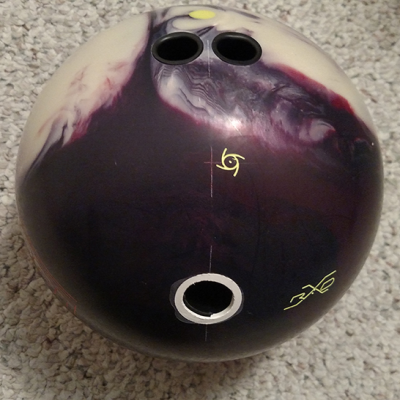 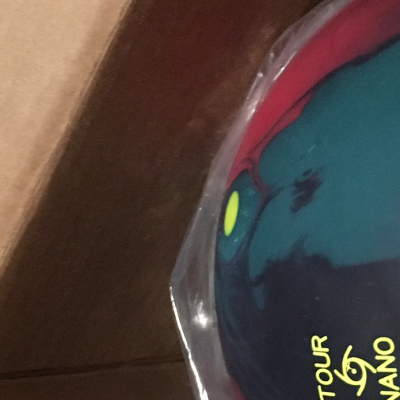 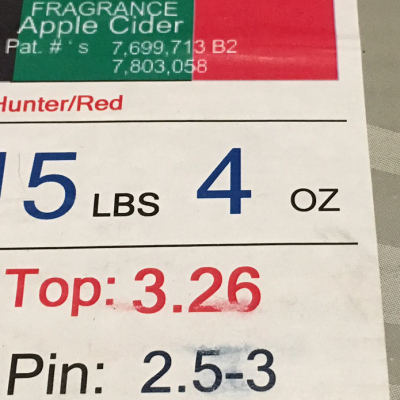 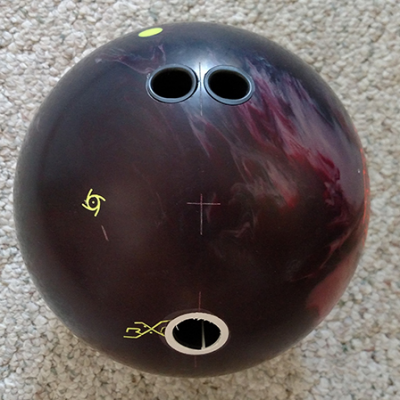 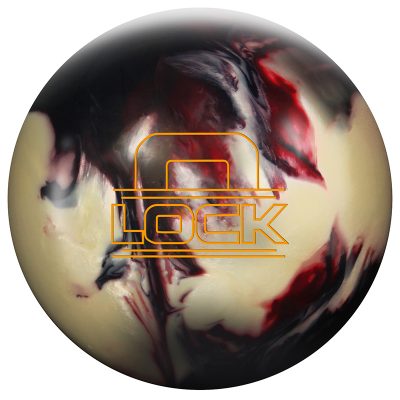 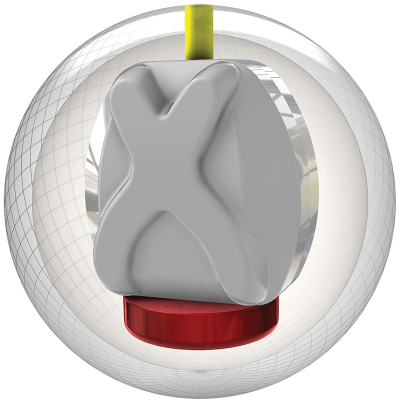