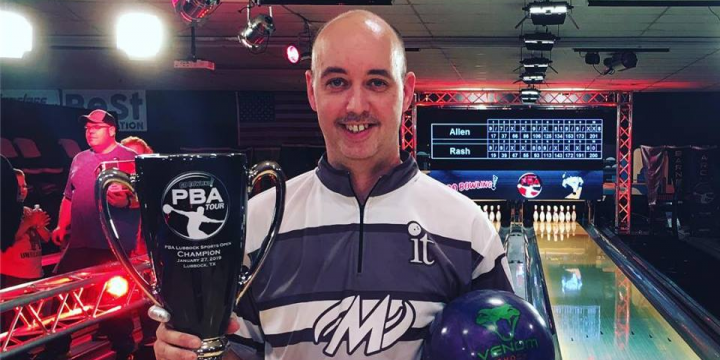 You might think Dick Allen edged Sean Rash 201-200 in the title match of the 2-pattern PBA Lubbock Sports Open because Rash missed a 10-pin in the 10th frame, and Allen then rolled the 2-pin, carried a mixer strike, and punched the face for a 3-6.

And while you'd be right, that’s not the whole truth as the two players’ attempts at the same leave earlier in the match laid the groundwork for one of the more bizarre finishes in PBA Tour history, and would have changed the winner if all else stayed the same, which never can be assumed.

Rash was in the fifth frame working on a double when he rolled what looked like — and he thought — was a great shot on the Wolf 32 pattern on the right lane, only to see it dive a bit high in the pocket for a 4-10 split.

Electing to gamble at an improbable conversion of the difficult split, Rash barely missed the 4-pin on the left. Getting zero on the spare immediately made me think to myself that he might regret losing two pins of count.

Allen was working on a strike when he crept high on the Scorpion 42 pattern on the left lane in the seventh and also left the 4-10. He routinely took out the 4-pin and got the two pins of count that put him up a pin in count on Rash and really made me think Rash’s zero on his 4-10 attempt might be decisive.

After converting a 2-pin in the sixth, Rash rolled three strikes — two flush shots sandwiching a late falling near-pocket 7-10 — to set himself up to win with any mark in the 10th.

His shot on the left lane was a very good half-pocket 10 that a messenger went in front of, leaving the former PBA Player of the Year needing just the spare and a 2-count to lock out Allen and claim his 14th PBA Tour title and second straight after teaming with Matt Ogle to win the Mark Roth-Marshall Holman Doubles Championship two weeks ago.

I had a bad feeling about the spare, remembering a few Rash has missed on TV in his fabulous Hall of Fame-level career.

And sure enough, he missed it to the inside, exclaiming “Oh God, Sean, what did you just do?” afterward.

It is uncanny how many times a single-pin miss will be decisive in a match — whatever frame it comes in — so I fully expected Allen to get the double and 8-count or more that he needed. And it could be in any manner, as it just seems the bowling gods punish those at the top levels who sin by missing a single pin.

So I wasn’t surprised when Allen nearly threw his first shot in the 10th in the gutter and needed a late and slow roll of the 2-pin on a shot that barely caught the head-pin, rolled an excellent shot for a mixer on the second shot, then tugged the third badly but managed to leave just the 3-6 on the face shot.

“Momentum always gains advantages,” Allen told FS1 sideline reporter Kimberly Pressler moments after his win. “Always. That’s it. I mean you saw that momentum right there on the first shot in the 10th.

Allen later said of his rolled 2-pin in this PBA news release that “I knew it was a bad shot about 35 feet down the lane. Whatever the result was going to be, it was definitely out of my hands at that point. I think when Sean missed that spare it took me a while to realize I still had a shot to win. I was very fortunate on that last shot because that could have easily been six. It was a roller coaster ride out there.”

For the 40-year-old Allen, who is in his 20th year on tour, it was his sixth PBA tour title — his last came in the 2018 PBA Xtra Frame Maine Shootout.

“I’m no spring chicken anymore,” Allen said in the PBA release. “I hope I can continue a trend of being a late bloomer. At my age I know I don’t have that many competitive years left so I’ll just enjoy the ride as long as I can.”

Before the show, Rash had made an eerily apt statement to Pressler when she asked about his rebound from what he has said was the worst year of his Hall of Fame level career: “It’s just the self-confidence, the support from my family and friends, the sponsors. It’s a new year. Everyone keeps talking about 2018 and I’ve already forgotten about it because we’re four weeks in, I’m bowling really well, and a lot can happen today.”

Back in my very mediocre 2-year PBA Tour career in the 1980s, I had a veteran (it kills that I can’t remember who) tell me something very wise once: “If you bowl on Tour long enough, everything that can happen, will happen to you.”

That also applies to other levels of competition and I’ve found it to be true in my four decades: I have won and lost matches and tournaments in just about every way possible, from totally lucking out to getting royally screwed, blowing wins and having others hand me wins. I'm sure if you asked other veterans, they would concur.

Sunday's show definitely can be filed in the “everything that can happen” category by Rash and Allen!

To his credit, Rash handled it like a true professional, even smiling at his screw-up and congratulating Allen afterward.

There is little doubt that the finish will go recalled for as long as there is a PBA Tour, not quite Del Ballard Jr.'s gutter to lose to Pete Weber or Randy Pederson's solid 8 to lose to Ernie Schlegel or Mika Koivuniemi's whiffed 10-pin to lose to Norm Duke, as all those were majors. But certainly just a notch below.

Here is an interview with Allen on the Let's Go Bowling Radio Show.

The stepladder finals opened similarly to how they ended, with Kyle Troup winning an improbable match in which he never struck on the Scorpion on the left lane but stayed clean with conversions that included the 1-2-8, 1-2-10, 2-4-5-8 and 3-6-10, then doubled in the 10th for a 198-186 win over lefty Rhino Page, who whiffed a 7-pin and then couldn’t convert a 3-6-7 split in his final two frames.

Troup was clean again in his second match against young talent Michael Tang, with a gutsy ball change the key in a 228-215 win. After changing from a PHYSIX to a CRUX PRIME on his final shot (ninth frame) on the Scorpion lane in the first match, Storm staffer Troup switched to an IDOL in the 10th and threw three solid strikes in the 10th, the second one nearly leaving a solid 9-pin.

But Allen steamrollered the colorful 2-hander in the semifinal match 278-188, firing 10 of the first 11 strikes, with just a ringing 10-pin in the fourth frame.

Troup later received a nod from TMZ and from SI.com for his hair and moves, and a lot of of momentum on social media, prompting him to post this on his athlete page:
"After having some time to reflect on yesterday’s show and go back and watch it... WOW what a show that was. I couldn’t be more happier with a 3rd place finish in the PBA Lubbock Sports Open.
Being able to grind away under the tv lights and win a few matches before running into a buzzsaw was a lot of fun. Huge congratulations to my good friend Dick Allen (THB) on winning your 6th title. Love you man!!
Quick shoutout to the G Keven Williams for making my sick strike song Pick It Out Thanks to my roommate Gabriel Nate Garcia for having my back in matchplay and throughout the week.
I want to take a moment and thank all my fans for the continued support and all the messages. You really keep me going in my career. Thank you to the staff and fans in Lubbock. You made the telecast!!
Thank you to Storm Bowling, Vise, High 5 gear, BowlerX, and TeamFish for giving me the best chance to compete at the highest level.
It’s time for a few days of practice then off to the Bradley before the TOC. #StormNation#Vise #TeamFish #BowlerX #H5G #Chasing300 #GoBowling #IMakeSpares"

Troup also talked about his spare shooting and the improbable finish to the show in this Bowlers Journal International story.

One other thing worth noting — again — is how awesome Specto is at analytically showing why and how things happened. Color analyst Randy Pederson is doing a great job using it to point things out like Page's rev rate difference on the two patterns.

The Go Bowling! PBA Tour is off Super Bowl week, with the next two tournaments being majors: the PBA Tournament of Champions from AMF Riviera Lanes in Fairlawn, Ohio Feb. 4-10, and the PBA Players Championship at Wayne Webb’s Columbus Bowl in Columbus, Ohio, Feb. 12-17. The TOC show is live on FOX at 3:30 p.m. Central time on Feb. 10 and the Players Championship show is live on FS1 at noon on Feb. 17.