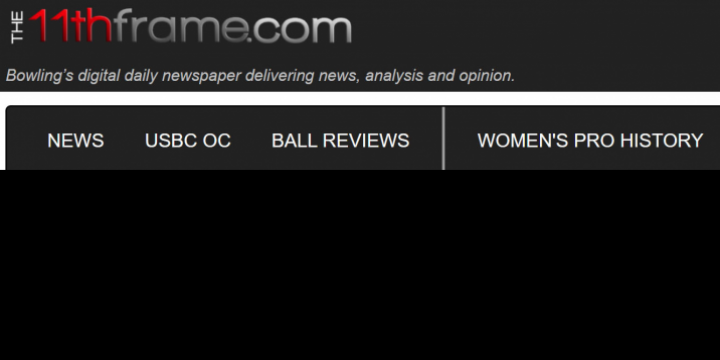 I've never met Eric Hartman, but he's like an old friend I can talk bowling history with forever. That's logical since Hartman might be the sport's pre-eminent historian.

Trust me when I tell you that if I get something wrong in a story, I will get an email from him. And I’m sure other writers and the folks at PBA, PWBA, USBC and other entities can tell you the same thing whenever they publish something.

Just as important is the work Hartman has done for me (and others) in researching and providing historical context to stories.

And after doing further research, Hartman discovered that in the 2007 U.S. Women's Open, which had a staggered telecast with 16 players in a bracket, Shannon O'Keefe defeated Stefanie Johnson (then Nation) 299-159 in the quarterfinals for a record 140-pin difference. That U.S. Women's Open was when the PWBA Tour was dark and wasn't an official PWBA Tour event and title until a ruling grandfathering the titles.

I own the book “Historical Dictionary of Bowling” that Hartman co-authored with John Grasso, and it covers about anything you can imagine wanting to know about bowling.

A few years ago, Hartman and I cooperated on a project analyzing USBC/ABC/WIBC records to find any great bowlers of the past never elected to the Hall of Fame who might be good candidates for the Outstanding USBC Performance Category that was created in 2011.

We turned the project into USBC but I’m not sure if the information was ever considered by the Hall of Fame Committee as I was not asked to serve again after 2015.

Somewhere in our long messaging history, Hartman and I got to talking about how hard it is to find complete women’s professional bowling records.

Hartman has some information in his book, but he concedes it’s not complete. And in a book is not the same as an online database, updated, complete and easily accessible.

It’s now done. And it’s easily accessible and free at 11thFrame.com — not behind my paywall. The direct link is https://www.11thframe.com/pwba/tournaments.

I hope my subscribers will understand that my site is just the host for Hartman’s work, which would make putting it behind my paywall simply wrong.

The database also is something that needs to be free because it’s a gift to the sport and everyone who cares about it.

It includes tournaments back to the BPAA All-Star in 1949, with dates, locations, winners, runners-up and scores.

And it includes the Players/Bowlers of the Year from the organizations and the media, the Rookie of the Year winners, and Robby Sportsmanship Award winners.

Hartman uncovered some interesting facts, including a discrepancy in Betty Morris’ career titles, and found a 1977 tournament in Nashville that is not in the PWBA’s official database that he feels should be.

He also found some bowling records where tournament names or other facts weren’t correct and/or standardized, and did what he could to check all those using resources like newspaper databases.

The most interesting fact I found was in major tournament wins. Many know that Marion Ladewig with 14 and Liz Johnson with 10 are the leaders in major titles. But I concede I did not know who was third — it's actually a tie at six between Donna Adamek, Dotty Fothergill, Wendy Macpherson, and Aleta Sill, with Kelly Kulick deserving an asterisk with her five women's majors and the 2010 PBA Tournament of Champions.

Johnson also deserves an asterisk in total titles as she won the 2017 PBA Chameleon Championship.

We welcome anyone who wishes to offer potential corrections or additions to the database, which we plan to keep updated in future seasons.