From toe to title? Getting back on the bike at the 2021 Madison Area USBC City (not a) Tournament 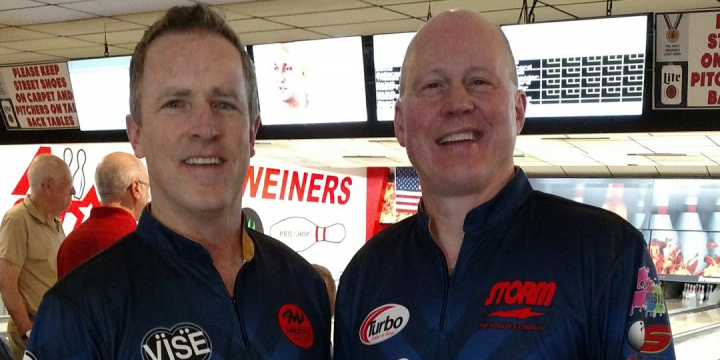 Marc McDowell and I at the 2018 Senior State Tournament, where we won the doubles title. Photo by Susie Fever.

I’ve explained a few times how I went into what amounted to hibernation with the COVID-19 pandemic because my girlfriend Susan Dyhr takes care of her 80-year-old dad, who has many health problems.

The odds were not good for her dad if either of us got it and passed it to him, so morally there was no question what we had to do. Fortunately we both can work at home, and we resolved to do what we needed to do and focus on a variety of house projects to fill our free time.

Other than a couple of trips to her family’s cabin up north, we did nothing “fun” since the middle of March 2020. That included bowling, which paused for me after the Senior State Tournament March 14-15, 2020.

Fortunately, we stayed safe so he stayed safe, and science conquered the COVID-19 coronavirus and he was fully vaccinated by early March. (Susie and I have had one shot and are scheduled to get our second on April 13.)

My first practice was March 17 and I had five practice sessions totaling 14 games before returning to competition Friday night in the Madison Area USBC City (not a) Tournament at Village Lanes in Monona.

Unfortunately, I had what I jokingly call “new ball syndrome” and brought a variety of the latest Storm, Roto Grip and 900 Global releases, all of them too strong for Village’s wet/dry house shot. I didn't realize how much they hooked and my new stuff was simply too much.

The result was I bowled like a complete toe, missing a 6-10 and leaving two Greek church splits for three opens in the first five frames. Eventually, as the lanes transitioned and tamed down I found a decent reaction with a Roto Grip RUBICON UC2 playing near 20-board out right of 10-board at the breakpoint.

Having learned my lesson, I had a completely different game plan for minors on Saturday, bringing a variety of older, weaker balls.

I ended up choosing a Roto Grip MVP PEARL because it is a rolly, smooth ball that works great for me playing fairly direct on a house shot.

My first game featured 10 strikes, a high flush 7-pin and a solid 9-pin, while Marc’s first game was marred by a rare whiffed 10-pin.

We both had the first 10 strikes in the second game, with Marc first leaving a blower 7-pin and me following with a ringing 10-pin.

Fortunately I was able to roll three flush strikes in the 10th as we took the lead.

After struggling with carry to start singles and trying a couple of other balls, I moved back right, switched back to the MVP and tried to throw it harder and just roll it and started the second game with a 6-bagger.

The MVP is one of those balls I absolutely love that virtually no one else I know even likes, as it’s not the sexy, big hook monster. But it’s a rolly, highly effective ball for wet-dry house shots, and flatter patterns that like a fairly direct shot, as I wrote in this review.

After being off for so long and having so little practice, I sure didn't expect that doubles performance, but with the right ball and an arrow to hit, I can still throw a few strikes, I guess.

Here are the standings for the tournament, which is off for Easter and runs through next weekend.

Here is my City Tournament preview story, which also includes the Madison Area USBC announcement that the tournament was being extended a weekend and some non-competition changes related to the easing of Dane County’s pandemic measures on Wednesday, March 10.

MA-USBC stated that:
“Since the tournament is already underway, any changes to State or County restrictions and mandates that affect tournament play will NOT be implemented to our tournament pandemic rules. For instance, if the Mask Order was rescinded, we would still require them for the duration of the event – in the interest of fairness. Qualifying restrictions would not change (one team per pair) in the event that social distancing rules were relaxed. Changes that do not affect tournament play may be implemented.”