Update: USBC on Monday morning e-mailed me their response to the question of the move of its headquarters from Greendale, Wisconsin, to Arlington, Texas, costing $25 million. I pasted it at the bottom of this blog in its entirety.

Bill Vint made the 20th anniversary issue of the Windy City Bowling News memorable with his "Special Report: The USBC Story: 2007-10."

The veteran writer, who had a nearly 20-year relationship with ABC, YABA and USBC as an employee or contractor, said he's not "a disgruntled, angry ex-employee getting my revenge on the company that wronged me."

Instead, he calls himself "a USBC fan" who was "always treated fairly."

The lengthy and fascinating story — I can't imagine how many hours it must have taken! — is a must-read for anyone who cares about bowling, as it delves deeply into the USBC's recent history, including the organization's controversial move from the Milwaukee suburb of Greendale to Arlington, Texas.

History may prove that move to have been correct, but right now it looks like a colossal blunder that has financially crippled USBC, leading — directly or indirectly — to program and job cuts and controversial moves such as the decision to allow alcohol during competition at the USBC Open Championships and to bring the USBC Open Championships and Women's Champions to Reno repeatedly over the next few years.

The Great Recession certainly contributed to the USBC's woes, particularly in making it impossible for the organization to get anywhere near what it thought it would for its old offices in Greendale, which still sit empty.

Vint's story is attached to the bottom of this story as a PDF.

Here is USBC's statement referenced at the top of this blog:

Bill Vint asserted that USBC's decision to move to Arlington was a bad one. Readers should note that USBC's share of the costs was less than half of the $25 million industry total that he is suggesting. That $25 million is wrong anyway, and by a fairly substantial margin. USBC's audited financials are available on BOWL.com for those who wish to review them.

The financial analysis also fails to consider the value of the Greendale building. And while the article claims that the building was "perfectly good", there had been plans for a renovation as well as an expansion of the Research Center there. Those costs, which would have been incurred, are not accounted for.

Cost savings from shared jobs will save both USBC and BPAA thousands of dollars for many years to come. Some of the departments and positions that are now being shared include finance, human resources, meetings/events, information technology, travel and the main receptionist. It won't be long before this adds up to millions of dollars and the article does not consider this in its cost analysis.

Most importantly, Bill only casually mentions the intangible aspects of the move: The biggest reason was being able to work together with the BPAA and other integers on projects that will eventually build this industry stronger. But also, increased ability to attract talent (something we've already seen) and ease of travel (both domestically and internationally). 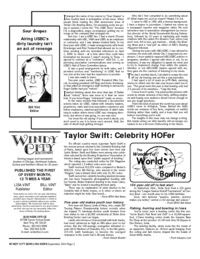