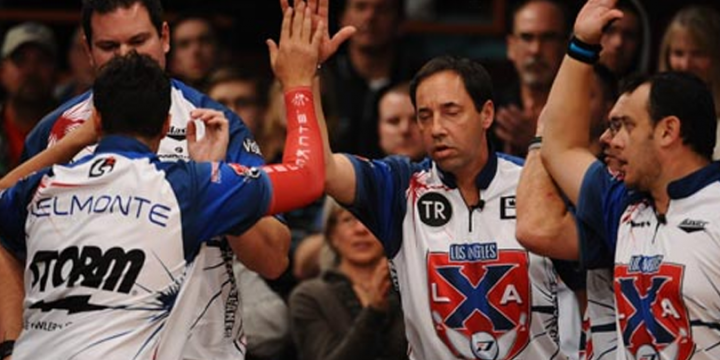 The PBA League will play a more prominent role in the 2014 PBA Tour schedule. Photo by Pro Bowlers Association.

The PBA League will play a more prominent role in the 2014 PBA Tour schedule. Photo by Pro Bowlers Association.

The 2014 PBA Tour schedule announced Tuesday looks a lot like this season’s schedule — with one key thing missing: the U.S. Open, along with financial support from the Bowling Proprietors Association of America, PBA CEO Geoff Reiss says.

If it happens next year, the U.S. Open almost certainly will end up as an official part of the 2014 PBA schedule, Reiss said in a phone interview, adding that it wasn’t PBA’s “idea or choice” to have it in the summer this year as is happening this week in Columbus, Ohio.

BPAA’s John Losito said in a recent message that “The BPAA Tournament Committee is still weighing options for the 2014 event, but that decision will be finalized no later than the October 2013 BPAA Board of Directors meeting.”

BPAA's evaluation obviously will take into account how the combined U.S. Opens go this week.

The bigger issue, Reiss said, is BPAA support — or lack thereof — of professional bowling beyond one major tournament.

Reiss emphasized that PBA appreciates the great support it gets from many proprietors, particularly those who “stick their necks out for us” by hosting PBA events, and has cordial relations with the organization.

“But there’s no sponsorship commitment from BPAA or Strike Ten Entertainment,” Reiss said. “I sincerely believe the people I talk to have a genuine desire we be successful, but that interest has not translated into any tangible action.”

At the same time, Strike Ten Entertainment, the sponsorship activation arm of the bowling industry, signed a multi-faceted, two-year partnership deal that has the 2013 and 2014 August NASCAR Sprint Cup Series races at Pocono Raceway renamed the “GoBowling.com 400.”

“Apparently the better use of resources is talking to folks as they watch stock car racing” instead of while they watch bowling, Reiss said.

Reiss said professional bowling on TV on a regular basis is important for the industry.

“I want to be clear that I am not asking for charity,” Reiss said. “PBA offers the largest and most effective means of communicating with people in the world who have an interest in bowling. My hope is that (BPAA) will take advantage of that reach.”

“We’ll continue to work with these guys and hope something happens,” Reiss added.

I have an offer into BPAA to print any response it has.

After a successful launch, the PBA League will play a more prominent role in the 2014 PBA Tour schedule, but singles events aren’t going away, contrary to some rumors.

There will be 11 PBA Tour singles titles up for grabs in the U.S. as PBA returns to a calendar year season in its 55th year, including the majors, the Summer Swing and the World Series of Bowling VI at South Point in Las Vegas. The U.S. Open could make 12. There also tentatively will be nine PBA International Tour events conducted in cooperation with the World Tenpin Bowling Association's World Bowling Tour.

“We feel confident these (PBA League) events can stand on their own legs,” he said.

There will be 46 hours of nationally televised PBA Tour competition, with the Summer Swing on CBS Sports Network and the rest on ESPN, as previously announced. I reported the CBS deal here and the ESPN deal here.

More details are available in this PBA news release.

- King of The Swing (special event)