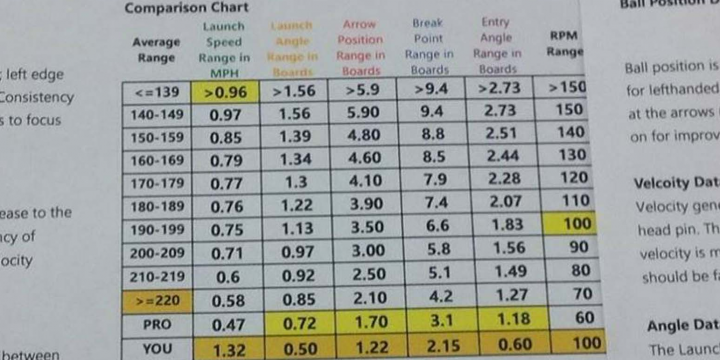 The TOC was the seventh time in eight major tournaments that Belmonte bowled for the title, and he finished eighth in the other one. This was across a wide range of lane conditions, from the short and low volume Tournament of Champions pattern to the flat U.S. Open pattern to the multi-pattern World Championships to the relatively high volume Masters.

On Sunday, he made it eight out of nine in winning the United States Bowling Congress Masters for the second straight year.

After getting home Sunday night, I was quickly scanning some of the many Facebook threads about it when I came upon a comment that instantly made me know what I’d write after I finally had a chance to watch the show at home.

Del Warrren, vice president at Kegel, wrote that “Belmo is the best. His CATS is as good as anyone recorded in the (Kegel) Training Center.”

I immediately sent Warren a message asking for details, which he said he’d get to me after getting back into the office. The data he sent me Wednesday is in the picture accompanying this story. CATS (computer aided tracking system) measures a bowler's speed, launch angle, accuracy, etc., enabling a bowler's skills to be scientifically measured.

You might say, duh, of course — Belmonte is the best in the world, he should have the best CATS.

But what the science shows is something I would never have imagined was possible: the man with the most power in the world also is the best shotmaker.

THAT is what I mean when I say Belmonte wins because he’s Belmonte, not because he bowls 2-handed.

In bowling history, there’s always been a natural trade-off between shotmaking consistency and power, because in almost all cases bowlers apply more force to gain more power and that naturally detracts from finesse and consistency.

Those that could give up the least amount of finesse and consistency while gaining the most power — Mark Roth, Marshall Holman, Pete Weber, Chris Barnes, etc. — became the best, and it was only the most supreme shotmakers who didn’t have much power who could be at the top — Earl Anthony, Walter Ray Williams, Jr., Norm Duke.

The thing the power players mentioned above and Belmonte have in common is efficiency of motion, meaning less force to produce big power and therefore less loss of shotmaking skills. Think of the fluidity and rhythm the four I mentioned and Belmonte all have, with flowing steps and swings and virtually every shot posted at the line. Roth looked quite forceful but had awesome rhythm with quick feet and a quick swing and release that translated to his legendary power.

Roth probably came closest to where Belmonte is now, but he had Anthony to deal with, and there really is no comparable player today. (It would be interesting to see Belmonte facing off with Walter Ray in his prime.)

In addition, the game has undeniably changed so that power is more of an advantage today than it was three to four decades ago.

The fact that Belmonte has both the most power — fellow 2-hander Osku Palermaa is right there but without the shotmaking skills — and the best shotmaking skills is why he is doing something I also never imagined was possible: becoming the Tiger Woods of bowling.

I always thought no bowler could ever be that dominant because of the vagaries of lane conditions and pinfall, but Belmonte is doing it. (The one factor that differs in bowling vs. golf is the one-game TV matches, which is like asking Tiger to win a 1-hole roll-off after he wins a tournament, so bowling dominance is best measured in how many title matches a player makes.)

I saw numerous posts about how the players struggled on the show, and how Belmonte was getting lucky, but I wasn’t really prepared for what I saw when I finally had a chance to watch the Masters show on my DVR on Monday night.

None of the five players ever looked totally comfortable or even close to locked into the pocket: Whether they played in or out, hooked it or went straight, shots missed high and light, hooked early and shot through the breakpoint.

Belmonte had plenty of strikes, but his misses were often dramatic, such as the 2-4-10 and 3-4-6-7-9-10 he picked up in consecutive frames in his opening match 227-214 win over Ryan Ciminelli. Those conversions also demonstrated Belmonte’s supreme shotmaking skills.

As I watched him struggle, switching balls and lines, never looking comfortable but grinding out wins of 202-173 over Tom Smallwood, 235-234 over Michael Haugen (who I’m sure feels he should have won the tournament), and 221-177 over E.J. Tackett, it dawned on me that Belmonte has become the (pre-scandal) Tiger Woods of bowling.

He was winning a major tournament with far from his A game, much like Tiger once did almost routinely: grind, grind, grind and find a way to win, no matter how ugly it might look, with some arrogance and intimidation of opponents to help.

“He absolutely grinded out there on the show,” Storm Tour Rep and PBA and USBC Hall of Famer Del Ballard said on Facebook. “They were not easy at all. He used three different balls and stayed with it. A true testament of how good he really is. Really reminded me of the old days. I have never had to have that many discussions on balls and reaction as we did on that show.”

Brunswick Tour Rep Chuck Gardner posted on Facebook something similar to what many said of the dominant Tiger: “It is also now official Jason Belmonte is the best in the world everyone needs to work harder to catch him.”

And didn’t Haugen make a fine Rocco Mediate, the straight player (short hitter in golf) who put up a game fight, not giving in at all, and probably should have won but somehow found himself edged out at the end?

I couldn’t help but think that Belmonte was the answer to former PBA CEO Steve Miller’s dreams — just a decade late.

Did Belmonte get some breaks along the way? Absolutely.

Were they the reason he won? Not by my figuring.

Belmonte got a trip 2-pin against Ciminelli, but outbowled him overall in the match.

Smallwood doomed himself with spare misses.

Haugen didn’t get the strikes he needed until it was too late, and Belmonte got the spare and 9-count he needed in the 10th.

Tackett fell too far behind and Belmonte closed him out with a solid spare in the 10th.

"I wish I would have had a chance, but Jason did what he had to do to win," Tackett said in this USBC news release. "I'm disappointed I didn't win, but it's an experience I'm going to learn from this and hopefully next time I can win."

So, considering the PBA Tour schedule that remains, the reigning PBA Player of the Year practically locked up 2014 Player of the Year, while making history as the third player to win consecutive Masters. The other were Billy Welu (1964 and 1965) and Dick Hoover (1956 and 1957).

"This tournament is so difficult to win," Belmonte said in this USBC news release. "I always have high expectations for myself, but to go down in history as the third one and first in 50 years to win back-to-back is a huge honor."

Here is a USBC video feature on Belmonte’s win.

The other thing that stood out to me about the Masters show is that it may have been Randy Pedersen’s finest work ever as a color analyst.

Time after time, Randy nailed what was happening or foreshadowed what was to come. His work with Hall of Famer Johnny Petraglia was excellent, reminding me somewhat of how Pedersen has been with Chris Barnes in the past — two Hall of Famer providing the kind of analysis only Hall of Famers who have been there can.

In noting Belmonte’s struggles, he said he was coming up at the line, moments after I’d been thinking that Belmonte wasn’t posting his shots as well as he usually does.

He noted that Belmonte was in the right zone but with the wrong ball before he eventually changed to the Roto Grip UPROAR that gave him the smoother back-end motion Pedersen had been saying he needed.

Pedersen may have been at his best between games two and three when Mike Jakubowski — who did a great job directing traffic as play-by-play man — asked him which ball Belmonte should throw and Pedersen said he wasn’t sure Belmonte even knew … which he clearly didn’t. The UPROAR was a suggestion from Roto Grip's Chris Schlemer.

And Pedersen called that Haugen didn’t quite have the “shim” he needed to beat Belmonte when a shot went high, then explained what a shim was.

It was excellent work all around.

The Masters lane pattern is attached to the end of this blog.

For more information on the Masters, including live scoring, go to BOWL.com/Masters.