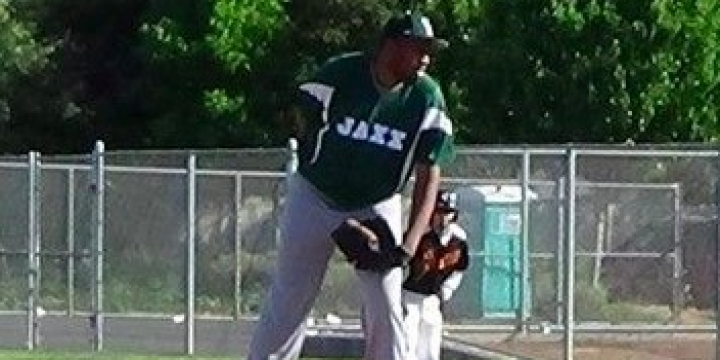 The picture of Gregory Thompson Jr. on the GoFundMe page for him.

In a terrible accident reminiscent of what happened to major league pitchers Tom Browning and Dave Dravecky, pro bowler Gregory Thompson horrifically broke his arm while throwing a pitch on Sunday.

Thompson said he will be out several months but his surgeon said he should make a complete recovery and get back on the lanes.

“Hopefully I'll be back for WSOB,” Thompson said in a message, referring to the World Series of Bowling this fall. “I love South Point.”

But he will miss the USBC Open Championships, where he was scheduled to compete in a few days on an excellent team that also features retired PBA Tour champion Robert Smith.

The worst news for the funny and popular Thompson is that he now has a $5,000 deductible from his health insurance to cover. Friends/teammates started a GoFundMe page for Thompson for people to make donations; I made one and the total already is nearly halfway to $5,000.

“Would love to thank my Left Coast Lumberjaxx teammates for starting the fund for me helping with my 5k deductible,” Thompson said. “Brought a tear to my eye to see guys who just met me 3 months ago come to my aid like that. Much love for them.”

Thompson described what happened in a lengthy message that is both fascinating and horrifying.

The fateful pitch came in the fourth inning with two runners on and a 2-1 count.

If you can handle it, here is YouTube video of what happened. The break came just after the 4:30 mark.

“Pitching from the stretch I go to throw a pitch,” Thompson wrote. “I hear a loud crack as if the wooden bat hit the ball. But it was my humerus bone (connecting the shoulder and arm) splitting in half. Originally I heard someone say he dislocated his elbow. The ball went flying closer to the dugout than home plate. And immediate excruciating pain. I drop to one knee and scream. Over and over "ahhhhhhhhhh" "ahhhhhhhhhh" I mae"ahhhhhhhhhh".

“Teammates, opposing team and umpires come to the mound. I hear them calling 911. Someone asks if I'm OK with someone driving me to save on ambulance bill. I say yes. I'm kinda losing consciousness from looking down and seeing my arm from the top of my elbow down being misplaced. Wiggling my fingers in front of me only to see them move 3 feet to the right. Scary scary scary.

“They help me to my feet and walk me to car. Still In shock still screaming. Once I sit in car I felt my bones shift and that's when I realized ‘no nationals for me.’ Extreme disappointment of letting my team down actually helped deal with pain momentarily.

“Get to ER. They take X-rays and it's the humerus. Nurses and doctors have no clue I broke that bone throwing a pitch. Typically it would take an awkward fall or being stuck repeatedly with a bat.”

Thompson chose the latter option because the first would have required tearing part of the rotator cuff, and that would have been one more thing needing to heal.

“Since bowling is my livelihood I didn't wanna mess with the rotator,” the MOTIV staffer said.

He had surgery on Tuesday. What was scheduled to be 90 minutes to two hours ended up lasting more than four hours.

“Dr. Sagoo found more fractures that didn't show up in X-ray,” Thompson said. “Other than that, surgery went smoothly. Doc says I will return to 100%. I go back Tues to have a check up and take splint off. Will talk about rehab then. 6-8 weeks no work. After that rehab and might he back on lanes in 6 months. He said that time varies patient to patient. Could be 4 months. Could be 8-10. His guess was 6. I am allowed to continue with baseball once I heal. That's a decision I'll make when time comes. Basically was a 1 and a million freak accident.”

Thompson is recovering at a friend’s house, “still in extreme pain” but “managing.”

“Want to thank everyone for the prayers, well wishes, messages, post, comments, calls,” he posted on Facebook. “I def feel the love.”

“Appreciate life because it's a beautiful thing. It's crazy how we take the smallest things for granted. For 3 days I haven't been able to stand up from a sitting position without crying from pain. Getting better now. God is good.”

Thompson vowed to be back “stronger than ever. And In the words of Jeff Frankos, ‘I'm coming for all of you.’ “