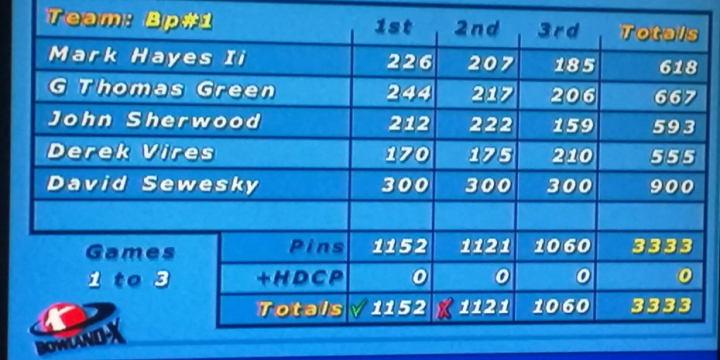 The scoreboard for David Sewesky's 900 series on Sunday. Photo from Facebook.

The scoreboard for David Sewesky's 900 series on Sunday. Photo from Facebook.
David Sewesky, a 2-handed left-hander from Dearborn, Michigan, fired a 900 series on Sunday, according to numerous reports on Facebook. The perfect series came just three weeks after Sewesky, 27, fired an 888 (300-288-300) in the in the Detroit Printcraft League. USBC reported that he left a 10-pin and a 6-10 in the 288 game.  Here is Dan Newton's cell phone video of the final three shots of Sewesky’s 900, which came at Plaza Lanes in Plymouth, Michigan. He nearly left a soldi...