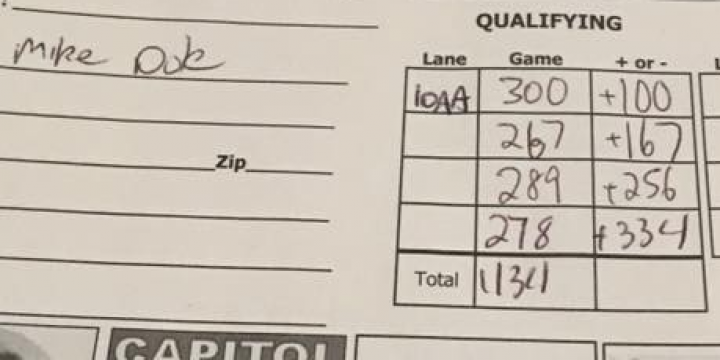 Mike Dole's scoresheet from the MAST Tournament on Sunday. Photo by Mike Dole.

Mike Dole's scoresheet from the MAST Tournament on Sunday. Photo by Mike Dole.
After Mike Dole fired 1,134 in qualifying for a Madison Area Scratch Tour record,  Derek Eoff won the title in the MAST survivor format tournament at Spartan Bowl in McFarland on Sunday. Eoff, a Storm staffer, beat lefty Mike Hoffman 246-202 in the title match for his sixth career MAST title. First was $673 and second $372. Eoff also earned $130 in the Bet To Win pot. I crossed with Dole and got to see the left-hander’s famous striking prowess up close and personal, as the...