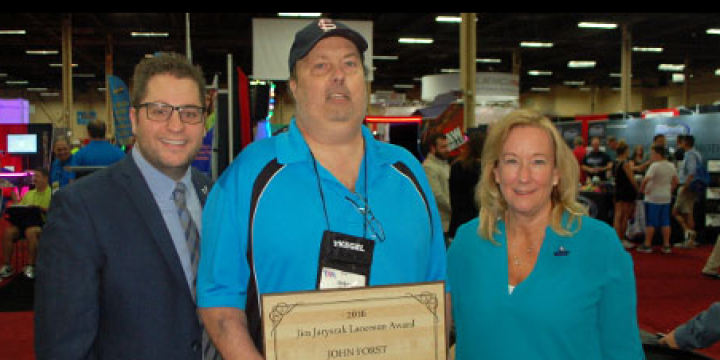 At this point, I have no details other than this Facebook post by IBMA administrator Jackie Wyckoff:
"SAD UPDATE ON JOHN FORST
John was found on the hotel property earlier today. He was unresponsive and paramedics were not able to revive him. Cause of death is unknown at this time. John's wife Tracy would like to thank everyone for help in trying to find John.
If you had shared my earlier posts, PLEASE DELETE IT. Feel free to share this sad news on your social media."

The only detail I am going to post is that there is no indication foul play was involved.

John was a helluva guy who most certainly did not deserve what happened to him. I have many fond memories of competing with him in PBA tournaments years ago and occasionally corresponding with him about bowling issues in recent years. He will be missed greatly.

Here is a PBA news release on Forst.

Note: According to multiple reports by officials at Bowl Expo, John Forst, who is fighting brain cancer, went missing Wednesday. He had not been found as of 8 a.m. Las Vegas time Thursday, according to IBMA administrator Jackie Wyckoff.

Here was her Facebook post on Wednesday with a picture of Forst:
"URGENT REQUEST TO BPAA MEMBERS AT BOWL EXPO
This is John Forst. He received the USBC JJ Lanemann Award today. He has been missing from the casino area at Mandalay Bay since 5:00pm. His memory is not great as he has a brain tumor and may have wandered off. PLEASE, if you see him, stay with him and call Len Nicholson at 520-468-9303. Thank you!"

If you’re an old guy like me, you came to know John Forst as a bowler — a very good bowler.

Forst was one of the PBA Tour’s best players from the Midwest when I was a young bowler entering PBA competition and he won a PBA Tour title and had seven top-5 finishes before retiring.

If you’re younger, you may only know Forst as a laneman — a very good laneman.

And it is for that reason that on Wednesday at Bowl Expo, Forst received the 2016 Jim Jaryszak Laneman Award, according to this USBC news release.

The award determined by the USBC Equipment Specifications and Certifications team recognizes a person for their behind-the-scenes work as a laneman.

“I had no idea,” Forst, who is fighting brain cancer, said in the release. “I’m not very big on awards, but it’s great to receive an award named for someone like Jim. I’m glad the service side is getting recognition.”

As a lane technician for Kegel from 1997-2007, Forst was trained by Kegel founder John Davis and Len Nicholson, the former director of lane maintenance for the PBA, to handle major events on the PBA Tour and events for the World Tenpin Bowling Association. He also was involved in the research and development of lane machines, lane conditioners and lane cleaners.

Forst developed lane patterns and performed topography studies while at Kegel, and has presented seminars on ball reaction and lane maintenance.

Jaryszak was the former USBC Research Manager who died in late 2010. He was instrumental in setting up the USBC Sport Bowling program and as the point person when the PBA was updating their animal patterns.

Past recipients are Nicholson in 2011; Sam Baca, the first Director of Lane Maintenance for the PBA, in 2012; John Davis, who was posthumously honored in 2013; Steve Cross of Kegel in 2014; and Bill Cooley, the head mechanic and lane maintenance supervisor at Earl Anthony’s Dublin Bowl in 2015.