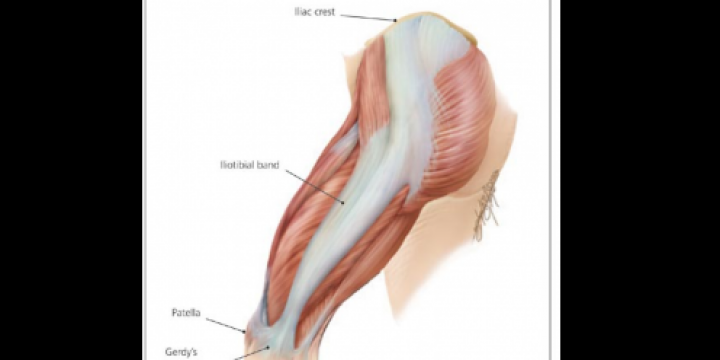 The good news is my withdrawal from the South Point Senior Shootout before the final round last week was not a re-injury of my hip, which cost me much of the summer of 2010 — I had feared I was drawing closer to needing a hip replacement.

The bad news is that I do have an injury that will keep me off bowling for a few weeks: My Iliotibial Band (IT Band) is partially torn from my iliac crest in my left leg, according to UW Sports Medicine Dr. David Bernhardt. (I graduated from Madison La Follette with Dave in 1980 and he is no relation to the owner of Turbo 2-N-1 Grips.)

My prescription is ice, anti-inflammatories and physical therapy, with my first appointment on Tuesday morning.

Pain will be my guide for resuming activities, but Dr. Bernhardt said it likely would be a few weeks before I can bowl again. For now, I'd just like to be able to walk without pain!

He said the IT Band is like a rope on, say, a boat hoist that as it ages becomes frayed and can simply snap. What happened to me in the second round of match play at the South Point Senior Shootout last Thursday is that mine snapped when I stuck shooting a 10-pin.

Once it heals with scar tissue, I should be able to bowl again and return to running with no lingering effects.

In the meantime, I will miss a couple of tournaments I really enjoy, including the Over 40/Under 40 Doubles on Saturday and likely the Henry Hitter on Dec. 17. I would like to be able to return by the New Year's Eve Classic, but I won't start again until I get the OK.

No bowling means more time for writing, so I can catch up on a few things.

The timing actually isn't horrible as I will be covering the World Series of Bowling Dec. 3-11 and the holidays are coming up.

I just hope that I don't gain back any of the 10 pounds I have lost since August by then!

Update: I had my first physical therapy appointment on Tuesday and was given exercises to start my rehab. They will be intensified and more added as my IT band tear heals.

The goal is strengthening my troublesome glute, which has never really been right since I tore it in 2014. That should both improve my form and help stem additional injuries.

My time frame for returning to bowling is six weeks minimum, which puts it around Jan. 1. One of my scheduled appointments is Dec. 29 and if I get the go ahead that day to try bowling, I will. Which means my first competition — my goal — would be the Kurt Davids Memorial New Year's Eve Classic on Dec. 31 at Schwoegler's.

But I will not push it if it's not ready: The worst possible outcome would be to re-tear it by trying to bowl before it is healed and ready.

Update: I tried bowling again Dec. 29 after reaching the point of being pain-free and re-injured my leg, which led to an ultrasound Jan. 12 that showed the IT Band tear was not healed.

After several more weeks of rest and rehab, I tried bowling again on Feb. 14 after reaching the point of being pain-free and the IT Band not feeling like it was pulling when I got into a bowling position.

I practiced again Feb, 16 and have had no problems and intend to practice again Feb. 21 and 23 and return to competition in the MAST Doubles at Sport Bowl in Middleton on Feb. 25.

My bowling progressed to the point where I was feeling well by mid-March and bowling fairly well.

But on April 1, I suffered another tear during qualifying for the Madison Area Scratch Tour Year End tournament and immediately withdrew.

I rested and then was managed to bowl the USBC Open Championships April 28-29.

I got some better-than-expected news from my sports medicine doctor on Monday. I have another ultrasound set for May 11. If it shows my IT band is more healed than the February one I may just rest for the next two to three months and hope it heals more and focus on my rehab and then resume bowling with the PBA50 Tour in late July.

If it's not looking good, I likely will have a blood platelet injection in the area, which is about $1,500 and not covered by insurance. It's worth it if it gets it closer to healed so it can withstand bowling better without re-tearing. That would be a week or two of no activity, then swimming and maybe the arc trainer for another month, then back to rehab with PT before returning to bowling in 3 months or so, which would be around Labor Day, depending when I get the shot.

At least I have hope of getting back to some semblance of Raisin normal.

(Surgery does not work for this type of injury.)

The news was about as positive as could be from my ultrasound.

The second re-tear of April 1 actually was a small adjacent spot that is healing and should be healed with scar tissue at around three months, which is early July.

The expensive, platelet injection that is not covered by insurance is not needed (unless the new injury doesn't heal).

So I will be focused on continued aggressive rehab until July and then will return to the lanes while ALWAYS wearing a Raisin sock ... and praying for no more re-tears of my IT band.

My goal is to bowl the PBA50 Tour stops in Hammond and Fort Wayne and return to a full schedule of bowling after that.

I returned to bowling in July without much discomfort and fairly solid feeling in my IT band. As of April 2018, I have had no further problems with my IT band or glute, other than some soreness you'd expect at age 55!

It took a long time to get back to bowling decently, but by 2018 I was feeling about as good as I can for 55 and have won a few tournaments and had several other high finishes.

So, fingers crossed I am past all of this!