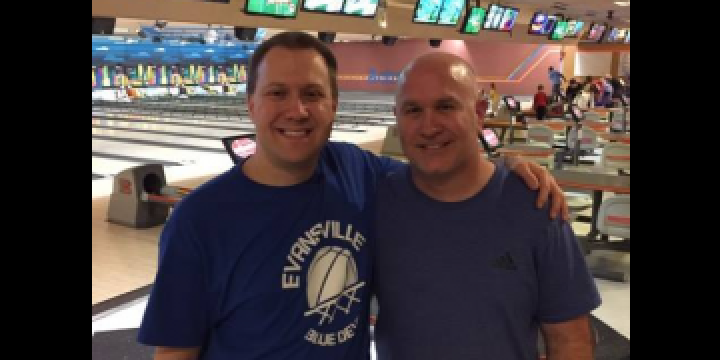 But that’s what happened on Saturday at Schwoegler’s Entertainment Center as Jay Heinzelman and Tom Howery qualified first and second and then made their way through the brackets to meet for the title of the Kurt Davids Memorial New Year’s Eve Day Handicap Singles Tournament, which Heinzelman won 245-219 (209 plus 10 pins handicap).

The 103-player field bowled four games of qualifying and the top 24 then advanced to bracket match play, with the top eight getting one bye. There was a 3-way tie for the final two spots, necessitating a ninth and 10th frame roll-off.

A picture of the match play sheet is attached to the bottom of this story.

The tournament suffered a couple of negative issues that impacted the competition and that Wipperfurth addressed.

The big one was that lanes 1-7 had something happen that caused the back-ends to skid.

After checking everything out, the logical conclusion is that the lane machine ran out of stripper after lane 8 when the lanes were oiled from 36 to 1 before the first shift. This Facebook post contains comments stating that Schwoegler's had lane machine problems in the days leading up to the tournament that caused league bowling to be canceled.

Rob Bloxham of Schwoegler's posted this:
"I can assure everyone Schwoeglers has gone through the oiler up and down. While I am not sure what exactly happen on Saturday, I am truly sorry there were issues. We are doing everything possible to make sure this doesn't happen again. We also want to thank Jim Wipperfurth for working with us on these tournaments, he does a great job and cares a great deal about his bowlers."

Just 16 bowlers competed on the first shift and the low end was not used and therefore not re-oiled before the second shift.

Wipperfurth said on the 87-bowler second shift everyone hit at least one of the pairs with the skipping system of skipping two pairs each game and one-fourth of the pairs had to hit both 1-2 and 7-8, with three of those bowlers — Jeff Smith, Gregg Williams, Aaron Heggard — were among the 24 players who advanced to match play.

“Scores were lower on those lanes, but there were some good scores,” Wipperfurth said in a phone interview.

He said the players who hit both 1-2 and 7-8 would have to pay just the prize money and not the lineage if they bowl the tournament next season.

Wipperfurth was so shaken by the SNAFU that he forgot to make sure the lanes were oiled between the second shift and match play.

“I wasn’t on the ball,” Wipperfurth said. “I was so involved in the frustration of the bowlers.”

When he was reminded, he made the decision to not have the lanes oiled because match play was nearly ready to begin and it would have been a long delay.

Of note, of the 16 bowlers on the first shift, eight made match play and four of those re-entered and bowled the second shift.

Wipperfurth said he had expected the tournament to draw 150 or more bowlers as it had at Badger when it was on a weekend day.

“Next year will be one shift,” he said. “First come first served.”

I didn't get to bowl yesterday because of my leg injury, but I won't let what happened stop me from bowling next year (if healthy).