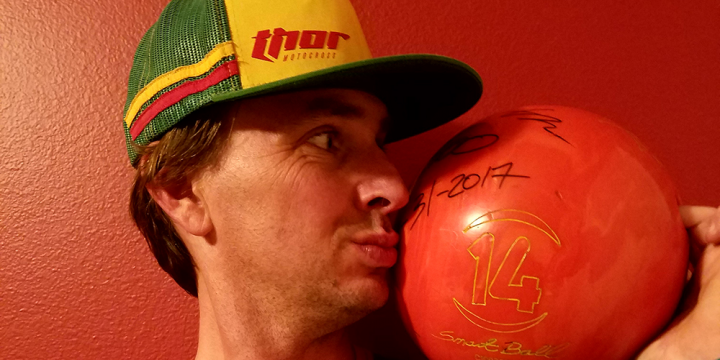 In the annals of improbable perfect games, Michael Myshkowec’s has to rank at or near the top.

Heading into last Tuesday night’s session of the Have-A-Ball League at Schwoegler’s Entertainment Center in Madison, the 40-year-old Myshkowec had bowled less than 10 times in his life and had never had more than three strikes in a row.

“I bowled maybe three times as a kid, three times in college, and then once in California on a date, and once when a buddy had a party,” Myshkowec said in a phone interview on Super Bowl Sunday.

The 40-year-old Myshkowec is from Manhattan Beach, Calif., and has been in Madison for almost a year helping college friends Kevin Abercrombie and Paul Kozlowski get The Lone Girl Brewery in Waunakee up and running. He was on a sabbatical from his job project managing as a civil engineer at an architect/engineering firm called exp when he volunteered to help at Lone Girl.

“A.J.” is A.J. Hurst, the chef at Lone Girl, and the third member of the team is Mike Castrogiavanni, Lone Girl sous chef.

Myshkowec was averaging 117 after the first week, and then bowled an outing with a group from Lone Girl the Sunday before the Super Bowl Sunday.

“I literally can count on my hands how many times I’ve bowled,” he said.

So when Myshkowec started last Tuesday’s league session with games of 123 and 133 there was no indication of what was to come in the third game.

Myshkowec is a right-handed no-thumber and was using a 14-pound, polyester house ball.

Myshkowec said he didn’t start thinking about 300 until he had the first six strikes in game three.

“I was just out there throwing,” he said. “We had lost our second game and A.J. was like, ‘We’ve gotta win this game.’ And we both started with a strike. I think he threw his second one and I did too. Then he didn’t strike in the third and I did. And when I got the fourth or fifth one, he said, “What the f--- is going on?’

“After six, I remember sitting down and trying to not to think about it. I just got myself into the mindset of a routine like a free throw shot. I literally went up, threw the ball, struck, high-fived A.J. and my partner, sat down and sipped on my Corona. At this point, my heart frickin’ was racing because I was kind of starting to think I could do it (shoot 300).  So I was breathing and focused. I do a lot of yoga and meditation so I know how to work my body and mind and get myself back calm. I just tried to get calm and do the same thing. I made sure no one was around me, grabbed my ball, took my two steps exactly the same and tried to do the exact same thing every time.”

As he got to seven and then eight and then nine strikes, “I was starting to freak out because everybody was paying attention then,” he said. “I just tried to stay calm. And I was cheering for everybody around me. I high-fived this girl next to me who made a spare and she asked why I was cheering for her when it wasn’t anything like what I was doing.

Myshkowec sipped his Corona and worked on his breathing as A.J. and the guy he was bowling against each struck out.

“And when I got up, everybody was camping around and it’s getting quiet and I’m nervous. But I stayed in my routine and took the same breaths. It was three breaths and breathing out every time when I released the ball. And I struck and everybody went nuts.”

Myshkowec said the 10th one seemed like the hardest of the final three, which is something I’ve always felt.

“But now my routine is messed up,” he continued. “I didn’t turn around. I just stood up there and didn’t look at anybody. The second one was ugly — I knew it was not the same throw — and it hit what the guys called Brooklyn. I didn’t know that until after when they told me. I’m a right-hand thrower and I hit the left side and everybody went ape s--t.

“I didn’t turn around. I put my head down and didn’t acknowledge anyone. Everyone was super quiet. They cheered and then were dead quiet.

“I was so nervous. I could feel my hands shaking and everything. I just got up there and didn’t hesitate and did the same thing and hit good (on the right side) and the whole place went crazy. Everybody grabbed me and gave me big hugs. I totally got mobbed.

“It was surreal. It was almost an out of body, out of mind experience. I didn’t sleep that whole night and it still hasn’t really settled in the whole way.”

The Have-A-Ball league is uncertified but that doesn’t really bother Myshkowec, who still is trying to grasp the significance of what he did.

He was referencing today’s resin ball technology, which helps make perfect games far less rare than they used to be.

But he was using a polyester house ball …. that is now his ball, although it took a little persuading of Schwoegler’s staff.

“I was like, ‘Dude, I’m buying this thing,’ ” Myshkowec said. “They told me they couldn’t sell me a house ball, but they ended up giving it to me. They were super cool about it.”

He says he has “no clue” what will happen when he returns to Schwoegler’s Tuesday night.

“I haven’t thrown since,” he said. “We went to the bar and celebrated (after the 300). I joked that I should just show up and not play. But I have fun with these guys. I’m excited to play again.”

NOTE: Below is the original story and update I wrote on Feb. 3.

Update: The 300 author is Michael Myshkowec, who I exchanged messages with in an effort to set up an interview this weekend. If and when that happens, I will write through this story.

Jessica Wipperfurth of Beyond the Pine Pro Shop at Schwoegler's reported that she witnessed the 300 and the story is true, except it was a 14-pound house ball.

This is one of those stories I still find hard to believe despite reassurances from someone I trust.

According to Madison area scratch bowler Troy Cox, a 117-average bowler fired a 300 game using a 10-pound house ball in an uncertified league at Schwoegler’s Entertainment Center on Tuesday night.

He said the picture that accompanies this story was taken by a friend who was bowling next to the 300 shooter. Cox works at the Echo Tap in Madison and his friend is a brewery rep.

“He couldn't remember the guy’s name though,” Cox said in an exchange of messages. “Only that his bowling name was Shakes. I heard about it from a couple of people in the league.”

I sent a message to Schwoegler’s management trying to get confirmation and additional details.

They’re so astronomical I think someone must be at least exaggerating the story being told to Cox.

I will update this story if and when I learn more.