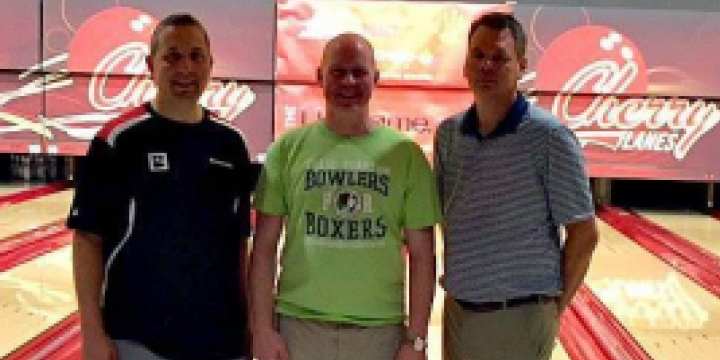 The 2017 GIBA 11thFrame.com Open will be Aug. 11-13 at Cherry Lanes inside the Diamond Jo casino in Dubuque, Iowa.

We had intended for it again be held the last weekend of August but Greater Iowa Bowling Association administrator Joe Engelkes and his family have a family wedding that weekend.

The weekend before (Aug. 18-20) we would have had to go without webcasting as Craig Elliott’s BowlStreamtv will be webcasting the New Mexico Open that weekend. The weekend after is Labor Day weekend and we wanted to avoid that, and dates after Labor Day don’t work for Cherry Lanes, so we went back to Aug. 11-13.

We realize Aug. 11-13 is early for those folks who don’t touch a ball during the summer, but we had no better choice. We intend to return the tournament to the last weekend of August in 2018.

Hopefully, the awesome amount of added money and the fun of the tournament format will enable us to fill the 156-player field again this year. (Last year actually was 155 due to a late withdrawal.)

The new addition for this year will be $2,000 in added money from the Dubuque Regional Sports Commission, which joins returning sponsors Diamond Jo, Storm Bowling Products, Coors Light, and 11thFrame.com. Storm is looking to add some special touches to the tournament this year as well. And Logo Infusion, which I became a staff member with last September, has come aboard as a sponsor as well, adding money to the prize fund and a jersey to the winner.

The new $2,000 from the Sports Commission will go $1,000 to a new Friday night sweeper that will be separate from the 11thFrame.com Open but contested on the same 2015 U.S. Open lane pattern used for the tournament last year and this year, and $1,000 to Cherry Lanes, which has not taken any money in lineage during the first four years of the tournament. That is a large sacrifice for the Diamond Jo and Cherry considering how much open play they lose while the tournament is going on, especially during C squad on Saturday night.

All of the $150 tournament entry fee for every player still will go to the prize fund, which now should have more than $5,000 in added money counting the sweeper!

Flyers for the tournament and sweeper are attached to the bottom of this story as PDFs. And here is the event page on Facebook.

The sweeper, which will replace the practice session, starts at 5 p.m. on Friday, Aug. 11, and features a simple format of five games with total pins determining finishing position. The entry fee will be $40, with $30 to the prize fund and $10 to lineage. The cashing ratio will be 1-in-4 with a first prize of $400 based on 60 entries. GIBA will run the sweeper.

If you can't make the tournament Saturday and Sunday, you still can enter the sweeper on Friday night.

The Holiday Inn Dubuque, which is at 450 Main St. about a 5-minute walk from the Diamond Jo, is offering rooms for $80 per night Friday and Saturday night (Aug. 11-12) for the tournament. I've stayed at the hotel many times and it's nice and that is a decent rate, especially considering how close it is to the Diamond Jo. Call 563-556-2000 and reference 11thFrame Open when making reservations. NOTE: There are other events in Dubuque the weekend of the tournament so make your reservations as soon as possible.

The pattern provided everything we were looking for last year: moderate scores; multiple angles in play, especially in Sunday’s 12-game semifinals; no guttercap lofting; and no left-handed dominance or shutout.

Update Aug. 11, 2017: Cherry Lanes manager Bob Hochrein reports that the center is using a different oil this year — it was a test oil last year and this year the center is using Defy — and therefore the pattern played with less skid.
We used the same pattern in the sweeper and scores were higher than during the tournament last year but not excessively so, and we decided to go with the same pattern for the tournament.
I would expect the cut to be somewhere between 50 and 100 over, about 50 to 100 pins higher than last year.

As I have written before, we previously struggled to meet our goals of having lefties, righties and all styles having as close to equal a chance as is humanly possible.

The first three 11thFrame.com Opens produced quality champions — McNiel in 2012, Matt Gasn in 2014 and McNiel again in 2015 — and there was no doubt quality shotmaking was required, so they were successful in those important ways. (No tournament was held in 2013.)

Ideally, everyone would get to play their A game at some point during the tourney, and there would be no huge difference in difficulty between left and right. Another goal is to avoid guttercap lofting becoming common and important to success as the lanes break down, which is not easy with Sunday's semifinals being 12 games.

In 2012, McNiel and Brad Snell were the only two lefties to cash, with McNiel putting on an incredible display of shotmaking in winning.

In 2014, many right-handers were lofting the guttercap early and lefties were all but shut out.

In 2015, lefties were first, second and fifth heading into the stepladder and bowled for the title.

Our biggest problem is that the innovative format that the competitors have said they very much enjoy features 12 games on Sunday. Finding a lane pattern that holds up for that much bowling and provides a fairly equal difficulty for lefties and righties is nearly impossible — there is just so much play on the right side.

But we think the 2015 U.S. Open pattern did that last year about as well as is possible. And we decided not to mess with success by trying something different.

All we ask of competitors and fans is to patronize the sponsors who help make this such a great tournament: drink Coors Light if you have a beer, eat and gamble at Cherry Lanes and the Diamond Jo, stay overnight in Dubuque, and patronize Storm Products and Logo Infusionif you can. And, yes, please subscribe to 11thFrame.com!

And please thank Cherry Lanes general manager Bob Hochrein and everyone else at the center and the Diamond Jo. Hochrein is a USBC Open Championships Eagle winner and PBA regional title holder who cares about the sport and manages a top notch staff.

Engelkes and his family are taking no expense fee for running the tournament, which again will be a points tournament in GIBA’s schedule for 2017-18. All the Engelkes ever do is take a portion of the bracket proceeds while donating the rest back to the prize funds.

The GIBA is sponsored by EBI and we thank EBI for graciously allowing my Storm-sponsored tournament — I have been on Storm’s staff since 1996 — to be part of the GIBA schedule.

The only extra fee entrants must pay is the GIBA $10 season membership fee, and that gets you the right to compete in other GIBA events like the great Fusion Realtors/Community First National Bank Open tournaments in Waterloo, Iowa. My story on the 2017-18 GIBA schedule is here.

Engelkes will begin accepting entries the week of June 4 for the 11thFrame.com Open. The only way to reserve a spot and make a squad and crossing bowler(s) request will be to send your $150 check made out to GIBA to GIBA, c/o Joe Engelkes, 3018 Saratoga Drive, Waterloo, IA  50702. He can be reached at 319-236-0955 or jengelkesgiba@gmail.com.

Update: The field is full and rosters are here.

Like the Fusions, the 11thFrame.com Open is open to any USBC certified bowler, including the top pros, though they typically have other tournaments to compete in.

The format again will feature 6-game qualifying squads at 9 a.m., 1 p.m. and 5 p.m. on Saturday with pins carrying over and one-third of the bowlers advancing to Sunday and cashing. With three squads full, there will be a 156-bowler field and 48 players advancing and cashing, and four others cashing.

As in the Fusions, bowlers can request to bowl with specific bowlers but lane assignments for pairs will be by random draw.

Sunday's "Flanagan format" will feature 12 games of bowling starting at 9 a.m. with bonus pins based on score from highest to lowest. For example, if 48 advance to Sunday in each game the highest scorer will get 48 bonus pins, the second-highest scorer 47 pins, so on down to 1 bonus pin for the lowest score each game. Whatever number of finalists there are, that number of bonus pins will go to the high scorer down to 1 pin for the lowest score each game.

After those 12 games, the top five will compete in a stepladder finals on fresh oil. (We accidentally had four on last year's flyer and therefore had to go with four for the stepladder. We can't apologize enough to Nick Kruml, who finished fifth last year, for the error.)

There will be optional prize funds for seniors and women similar to the Fusions, along with brackets and pot games. And there will be a SMART option for youth bowlers, as GIBA offers with the Fusions.

Seniors and women each are guaranteed a 1-in-3 cashing ratio paying at least $150 per check. For example, if 15 seniors enter and two cash in the regular prize list there would be three separate senior checks so five cash.

My 11thFrame.com sponsorship again will be $400 that goes directly into the prize fund for the tournament. Diamond Jo in turn will take $400 of its sponsorship and turn it into 10 $40 free slot play cards for a fun post-qualifying drawing for non-cashers only.

As soon as the final standings are determined, we will draw 10 numbers representing all the non-cashing positions. The bowlers who finished in those positions will get the free slot play — if they have a Diamond Jo players card and are present when their names are called.

If a winner is under 21, I will take the free slot play and pay the youth $40 out of my pocket.

If there are ties in the standings, the higher position goes to the player with the higher game.

This encourages people to get Diamond Jo player cards, stick around or return if they bowl early, and gives something back to non-cashers that they might be able to turn into some significant money as if they made the cut. That happened last year when one of the non-cashers who won the free slot play won a jackpot of several hundred dollars.

Finally, my girlfriend Susie "Fever" Dyhr again plans to run a fundraising effort for Green Acres Boxer Rescue of Wisconsin, which brought into our lives a lovable, knucklehead of a boxer named Otis. She designs T-shirts for the tournament with Green Acres benefiting from each sale. We appreciate your support!