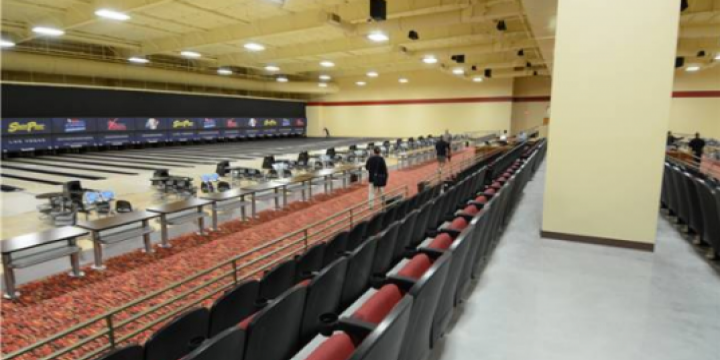 The United States Bowling Congress might not be providing lane pattern data for the 2017 Open Championships, but it is providing something that experts say can be even more valuable: topographical charts for all 60 lanes at South Point Bowling Plaza.

The charts for the Plaza are in a PDF attached to the bottom of this story.

We plan to incorporate the charts into our game plans for team and minors once we learn what pairs we are on.

If you don’t understand topography, here is the comprehensive story I did in 2014 thanks to the tutoring and guidance provided by Kegel and Lane Installations.

In an interview earlier this month, Kegel technician Ted Thompson offered a great analogy that should allow anyone to understand the principles at work with lane topography.

He noted that both Daytona International Speedway and Indianapolis Motor Speedway are 2 1/2 mile tracks. However, the turns at Daytona are much more banked, allowing for higher speeds than Indianapolis, given all other things are equal.

The banking exerts a force on the cars toward the bottom of the track and increases friction, enabling them to go faster without losing control.

On a bowling lane, a bank measured in mere thousandths of an inch exerts enough force to impact bowling ball motion.

However, there are no rules on how quickly the depression and crown numbers can change, which is what allows for substantial slopes on a legal lane.

For example, a perfectly flat cross tilt of 40-thousandths either to the right or to the left is a simple 1-thousandth per board, which would impact a 15-pound ball rolling end over end at 18 miles per hour about an 1 1/2 inches over the length of a lane. Since the force is constant across the lane, a player wouldn't even notice that force in adjusting as the lane breaks down.

However, many slopes are greater than 1-thousandth, which means much greater forces are exerted on a ball, and are not constant across the lane, meaning moves on the lane can lead to unexpected ball reaction. A slope of 4-thousandths, for example, exerts four times as much force on a ball.

On a topography chart, yellows and reds indicate slope to the left, blues indicate slope to the right, and green indicates areas on the lane that are more neutral, although there might be a little slope towards the direction of whatever color is beside it. The darker the color the greater the slope, so dark reds and dark blues slope the most.

See the PDFs attached to the bottom of the story for the correlation between the measurement and amount of slope, and a more detailed explanation of the concepts.

This story earlier referenced the formula for figuring out how much slope equates to how much impact on a ball based on a 15-pound ball going 18 miles per hour with end over end roll.

However, it’s obviously not quite as simple as that.

“With end over end roll it’s fairly simple,” Thompson said. “It’s much more complicated when you figure in axis tilts and rotations and ball speeds.”

For example, with his high axis rotation, Pete Weber is impacted more by slope than someone with more end over end roll like Norm Duke, Thompson said.

So depending on topography and the lane pattern and how he plays a lane, Weber can be helped (and help himself) or be hurt (or hurt himself) more than a player with more end over end roll like Duke.

A general rule is that lower ball speeds and lower ball weights are impacted more by topography, which is simple physics: a slower object spends more time on a slope and lighter objects are easier to move than heavier objects. That means a Raisin like me using a 14-pound ball with moderate to slow speed can be helped or hurt more than a bowler throwing a 16-pounder with high speed.

Thompson said topography is why one lane can hook back more than another lane with half as much oil to the outside.

“It’s why today it’s very hard to line up off each other unless you have very similar games and are playing the same part of the lane,” Thompson said.

It’s also why when lanes transition, a lane that was tighter than its companion in a pair may begin to hook more: players are migrating to the inside and possibly changing to different slopes on the two lanes.

Think about these things the next time you curse the lane man or lane pattern designer — it's quite possible topography is the reason for the stark differences you are seeing.

An important thing to note is that a ball only cares about the fraction of a board it is on — in other words, if you’re playing fairly direct up around 5-board, the slope around 20-board is meaningless.

In that vein, if you look at lane 2 at the Plaza, you can see blue and green on the outside toward the end of the lane. That’s not going to impact strike balls, but it might cause a shot at a 10-pin to unexpectedly drop into the gutter (bad) or not hook by (good).

“I think as topography becomes more public knowledge, the light bulb will go off for a lot of people,” Thompson said. “This is much easier to understand than an oil pattern because it’s not changing every shot.”

Because Thompson works for Kegel, the official lane maintenance supplier for the USBC, he didn't want to comment on any specific lanes at the Plaza.

But as a semi-qualified, non-expert I can take a stab at it.

And I feel a little more confident after sending information to my close friend Andy Mills of 2012 team Eagle winner Nicholas J’s Pro Shop before they bowled team on Sunday.

They were on 51-52 and I told him 52 was likely to be tighter than 51 as downlane 51 is mostly yellow/red and 52 has some green/blue. (Andy and most of his group are right-handed so we're talking about the right side.)

In a text message Monday morning, Mills said I was “spot on” and that he missed the head-pin seven times on lane 52 as he shot 572 and the team 2,897.

I don’t have the time to do a story going through every lane, but there are lanes where you can see slope differences that would tell you things about the lanes that you can incorporate into your game plan and lane play. Lanes 9-10, for example, are like 51-52, with 10 likely to be tighter downlane.

Remember that while this is based on physics, it's as much art as science with so many different factors at play, and you're probably best off looking for things like downlane topography that might tell you lane 52 is going to play tighter than 51 (for right-handers).

The exception would be something extreme like a lane with a lot of dark blue outside 10-board on the right side, which would tell you playing an outside line would be problematic. Fortunately, the Plaza doesn't have any lanes that extreme.

PBA50 Tour player and former baseball pitcher John Burkett embraced topography after bowling in a PBA tournament in 2015 where the charts were available.

“People don’t realize how important it really is,” Burkett said in a message earlier this month that helped spur me to finally get this story written. “I realized that topography has a MUCH stronger influence on ball reaction than the actual pattern does. I hear people all the time say, ‘There is no way they oiled these two lanes the same. They are completely different.’ We now know why.”

Looking at the Plaza topographical data, Burkett said: “You can see that 11 & 12 are the tightest pair (for righties) in the building. Also, quite a few pairs seem to have very contrasting ‘gravitational influences’ causing one lane to hook more than the other.”

It’s important to note that the Plaza’s topography is all within USBC standards and that many centers that haven’t been leveled as South Point has been could have much bigger differences.

When I register our teams at South Point a couple of days before we bowl and get our pairs, I’ll include the topogaphy for those lanes in a story about our general game plans. 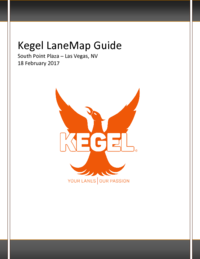 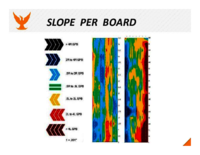 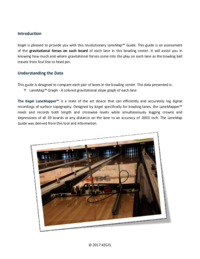