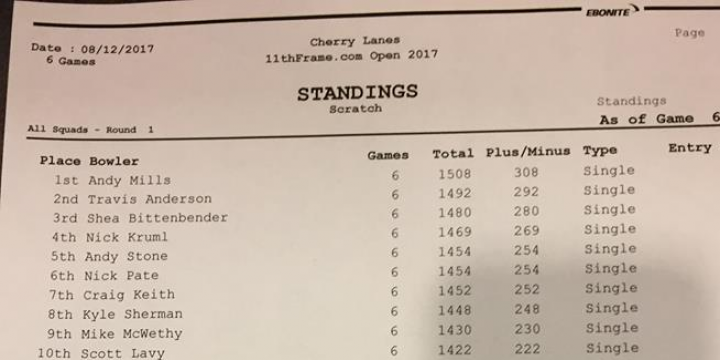 Andy Mills led with 1,508 for six games and the cut was Ryan Lakota at 1,293 in Saturday’s qualifying for the 11thFrame.com Open at Cherry Lanes inside the Diamond Jo Casino in Dubuque, Iowa.

The 3-squad field of 156 players bowled six games of qualifying with the top 48 advancing to Sunday’s 12 games of “Flanagan format” semifinals and the top five then advancing to the stepladder finals.

Mills highlighted his round with a 299 game, leaving a solid 10-pin on his final ball, in leading the 156-player field. I crossed with Andy and got a front row seat for the La Crosse right-hander’s strike barrage.

The 2015 U.S. Open lane pattern was used again this year, but with a different oil there was more friction and higher scores, as Lakota got the last spot for Sunday’s semifinals at 1,293 and Dan Marazzo got the 52nd and last cash spot at 1,287.

Pictures of the five pages of results are attached to the bottom of this story.

Here is the link to Sunday's semifinals webcast.

Thanks to all of our great sponsors: the Dubuque Regional Sports Commission, which joins returning sponsors Diamond Jo, Storm Bowling Products, Coors Light, and 11thFrame.com.

I had a forgettable day of qualifying that showed both my age and my rustiness, totaling just 1,198 even with an opening 259 game.

I used a new Roto Grip NO RULES EXIST for the 259 with a great reaction playing direct from outside 5-board.

However, that reaction turned into a flat 10-pin reaction quickly and I followed with a 173 that featured two missed 10-pins due in part to a mental block I have shooting 10-pins since that is how I tore my IT band last November. My leg is healed now and I have not had any issues since returning to bowling in July, but my mind can’t seem to accept that.

I followed with a 203 and then began searching for some Mills-like striking magic and in my ball and angle/release changes lost the pocket at times with 169, 192 and 202.